The Thing About Flowers 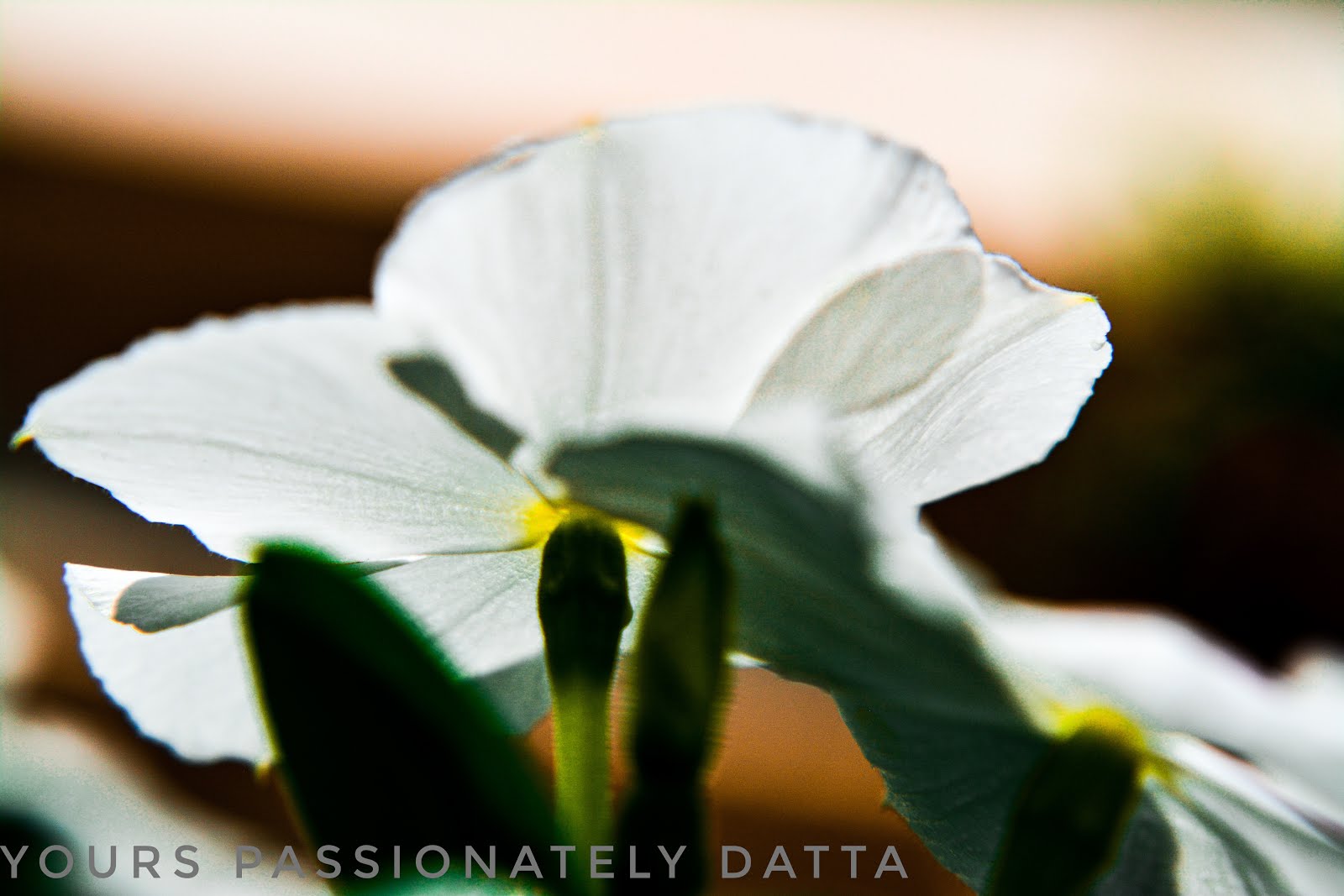 "If you are not a bit broken then may be you are of no use to me and my attention." I was fiddling with these line in my head, eager to place it somewhere or at some place. It was 7 o'clock in the morning and I was lying down funny in my room. My old man, would be the go to person for this creative urge, but it is too personal. He will gauge the intensity and then things will not be that good for me.

The commotion at the living area, got my attention and a sprang to action to meddle into "family matters". I saw Mother and Father staring at the lush bouquet of white lilies lying suspiciously at your door step. My mother was giving an eye full to my father and he sheepishly said, "We have a young lady at home and anonymous admirer at the door steps, Go figure."

"Et tu Brute" cried my brain as I squinted my brow to look at my father. My mother looked at my exasperated face. I seriously was flummoxed and looking at both of them. It is their matter, why am I the scapegoat?

"This is the seventh day, we have white flowers delivered at our doorsteps." My mother shot an interrogation towards my father.

"Seven days seven lily bouquets and you never bother to vase them." I put my remark with a casual air and regretted just immediately as now, both of them did not take my words kindly.

" They were not lily, but white flowers." filled in my father.

Meanwhile, we reached the eye of the storm, it went calm and we knew, it's definitely not over. I perched on the sofa, putting up a straight face. My mother took in the flowers and came seconds later with them in a vase. I gaped and looked at my father to see a similar expression. She placed it above the fireplace. and went inside, may be towards kitchen to fix us a quick breakfast.

"May be I know who is sending me these flowers." father said dreamily. I looked at him and he was staring at those lilies.

"She was the silent kind, not the kind of silence you wear. Your silence has a sense of pride, confidence with a tinge of sarcasm. Her silence was a timid and shy one. She glanced and then averted her eyes. The doe shaped eyes, with the gaze of an antelope, pleading, innocent. Something in me, the primal me got hooked to her gaze. I felt a sense of power rush through my veins the moment I returned her gaze and she looked down at the floor. Her eyes, the way she moved, walked and walked away, made something in me howl. Now, this was not a howl of pleasure, nor of pain. There are certain howls that come from the animal part of your soul or may be your brain. Guess, we will never know it."

He paused and looked at the lilies. It was not everyday that this man used to be so, candid. I was listening with a sense of unease. I know him as a father and now this man was revealing a certain darkness from the times I did not know him.

He kept the gaze fixed at the flower and continued, "I never talked to her, never felt the need. She did not need my voice nor my words. How did I know it? She was transparent for me, there was nothing to hide, she was thread bare in front of me. I looked at her and she traced her step back, nervously. She bowed down her head and held her palm tightly in a fold. Did I like it? I relished the idea of her, the concept of her being so afraid, exhibiting that beautiful fear. I never felt this surge before and may be I never felt it after her. For her, there was  a part of me that I never knew. She stoked it. She was my white canvas and I was free to paint them with colors. Not the colors of mirth, but colors that ravage you, that devour you in parts and in whole. She was my very own white canvas to exploit with all the shades, to drench, to transform into something that is solely for my delight."

An uneasy lump started to pile up in my throat. My mind was running amok with many possibilities. The other side of the mind was wondering, why is he telling me this. May be he is not telling me at all. May be he is just speaking to those flowers.

"So, I started it, the painting. I left a white flower, at her designated place, when I went for the classes. When I returned, she would stand there as she was supposed to, with the white flower in her hand. I looked at her, as I always did and smiled. She understood that it was me who kept the flower there. So, it started, I kept a flower, a white one, at times with a tinge of colour and she accepted them every single day. It was a token of acceptance, of her surrendering to me. It was up to me, how I colour her. And slowly it became an obsession, my very own obsession. I woke up a bit early, selected the flower for the day and went to leave them at her spot. Everyday there was something new. At times there was a smile, at times she was in anticipation, there were days when she stood cold. Whatever she was, there were colours to her. She was white, the shade created when rainbow merges into one. As time went by, she was in my dreams, in my waking hours, an omnipresence. I was never void of her. She, in her surrender, bound me in some unseen leash."

I was sitting quietly with my eyes frozen at those flowers. Studying every petal to its last detail. My mind wandered into scenes of macabre. My head spinning with the ideas of what would have this man done the next. I could see his eyes welling up in an unsaid form of frenzy. She is still, in his heart an obsession. She was for him everything unattainable. I asked him, "What did you do about it?"

He looked at me and smiled, "Nothing, that you are thinking. For all the darkness in me there is a light in me. The very light that created you and the family I today have. She was, the white canvas of my darkness. I looked at her, I was possessed by her thought, she was my singular delight and intent for those college years. She still is within me, but not without me. My darkness started and ended with her, my darkness was for her and dear, I do not touch my darkness. I took from her, what was mine: her surrender and melted away in time. A few months there was a news that she had met with an accident and might have died, but then there are gossips surrounding people shrouded in mystery. A friend told me and I just nodded to give this information a pass. If you ask me, she must be successful and happy, sipping tea in her loving home."

Mother called for us in the kitchen, we went to help her with the breakfast and tea. In the past half an hour, my mind had wandered places. I was amused, then curious, in between I felt discomfort at the prospect of my father having a darker side to him. Now, I am smiling, it is funny, how we picture our parents to be this perfect image. It takes just a few lines, few minutes to judge them for the very same traits that we have. We, forget to acknowledge our parents as humans, those with flaws, history, dark and their very own stories of shame. I looked at my father, he gave out a guilty smile. Now, that I know him as another human, he was afraid of love lost. I smiled back at him in assurance and passed the cup of tea I just poured.

"Do not be suspicious of your father. I shifted the blame on him so, that he does not speculate about me." My mother said in a firm whisper, as I walked and stood by her side in the kitchen counter and goaded her to join the breakfast.

I looked at her and she had a face mixed with panic and a resolution to tell it all. Looks like the lilies brought in some sweet surprises for me.